Starving babies. The sad result of trapping and relocating wildlife

The helpless cry of baby raccoons when their mother doesn’t return to their den is heart-wrenching. The mother – trapped and relocated by a pest control company – leaves the fragile litter to fend for themselves.

For those babies, the most likely scenario is a slow and painful death from dehydration and starvation.

Having wildlife nesting in human structures is a common conflict in B.C.

Contrary to what many believe, trapping and relocation for wildlife control is not a long-term solution and is not humane.

Here is why trapping and relocation of wildlife is not humane:

When you trap and relocate, orphaned babies are left to suffer

Separating mothers from their litter has horrific consequences.

Baby animals like raccoons, squirrels and skunks rely entirely on their mom’s care for the first few months of their lives. During this time, moms leave the den in search of food for their babies.

When a foraging mom is trapped and relocated far away from her home territory, her babies are left behind and face dying of starvation.

When humane exclusion methods are used to remove them from your property (instead of trapping and relocation), the mothers will simply take their babies with them to a different den site.

When you trap and relocate, animals face the dangers of unknown territories

Relocating an animal far from their home territory puts them at risk of injury or death.

Surviving in an unfamiliar environment is dangerous. Relocated animals may struggle to find sources of food or places to den. They might succumb to injuries caused by fighting other animals who already live in that territory.

For urban wildlife, the situation is no different.

Raccoons, skunks and squirrels have adapted to urban environments. When they are trapped and relocated to unknown areas, they might lack the skills to survive in their new environment. Moms might get lost or die trying to find a way back to their babies.

When you trap and relocate, moms get injured trying to escape

Animals who are trapped often injure themselves and might die while trying to escape.

Mother animals are especially motivated to fight hard to escape as they know their little ones are waiting for them. Injured mother raccoons may not be able to care for their babies, even if they are back with their littler.

To avoid this scenario, humane pest control companies will first safely remove adult animals. They will then locate and remove the little ones, making sure no babies are left behind. Then they reunite mother and babies, preventing animal suffering by keeping families together.

How to avoid causing animal suffering when you have unwanted wildlife on your property?

The first step is to say no to trapping and relocating wildlife. 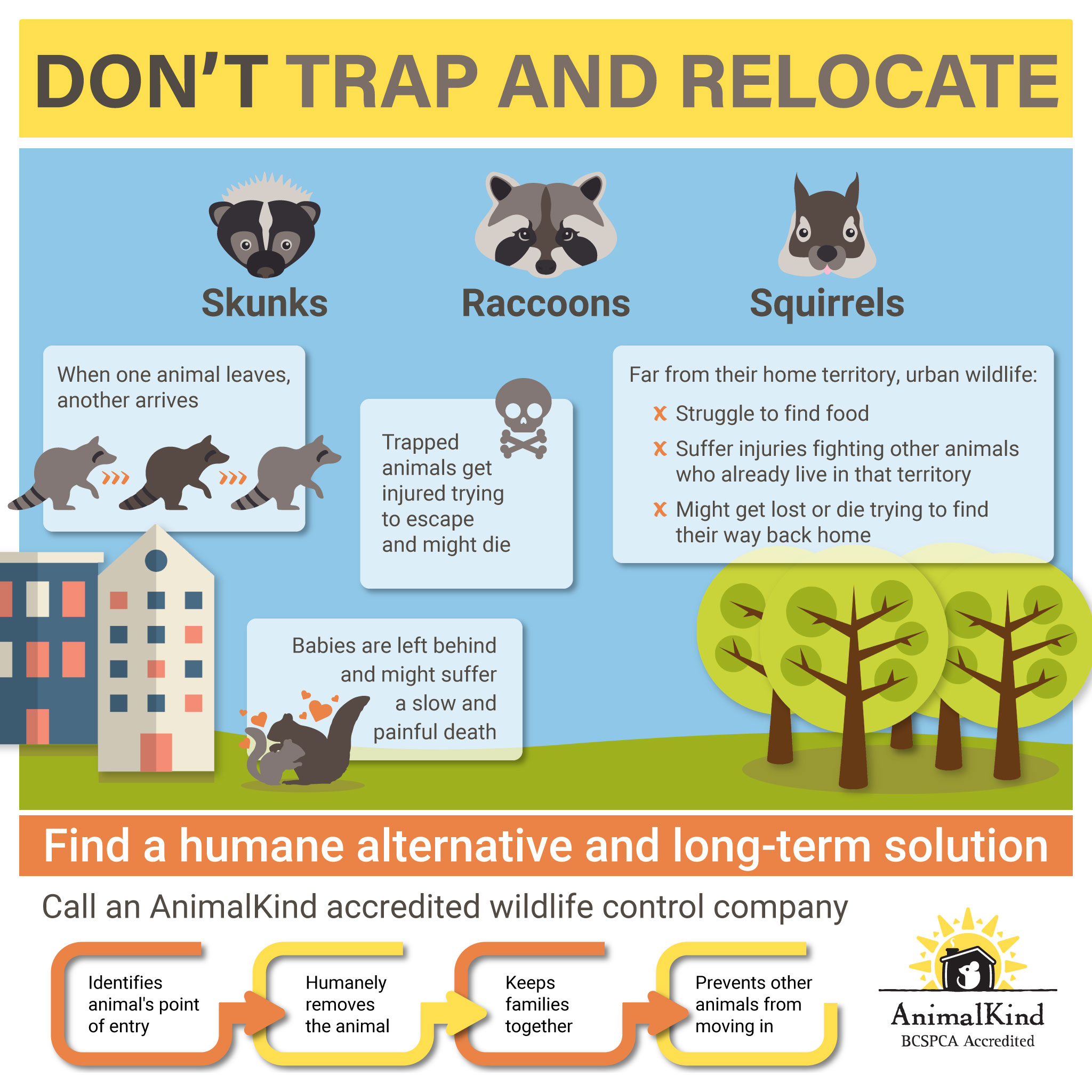 Long-term solutions for wildlife control require implementing a management plan that includes identifying the animal’s point of entry, humanely excluding or removing the animal, and making sure no other animals can enter.

A professional animal-friendly wildlife control company can do that work. In B.C., contact AAA Wildlife Control or Alternative Wildlife Solutions to do the job. They provide effective long-term solutions using humane practices.

Stories about babies left behind when a mother is trapped and relocated are a sad reminder of how common this cruel practice is. Don’t trap and relocate!

Make sure mothers and babies stay together!